If there is one thing that will tie people together it would be their love for music. And this is a very important subject to me as you probably already know if you’ve been reading some of my other posts. You may have noted my passion and excitement over the Wholetones product (you can read my review here).

It seems like no matter the country or culture, music seems to play a huge role in the lives of those living there. The way music affects each of us is typically the same. We tend to love the songs that make us feel the most emotional reactions.

Music has so many purposes.

Music is not just for entertainment – although that has historically been my reasons for playing and singing. I used to play at a state fair in Maine (The Fryeburg Fair – see ancient photo of me on stage from the 1990s); it has made remarkable differences in the lives of individuals suffering from physical and emotional issues.

It certainly has been the case for me. I have always had a “searching” and spiritual nature, and music was (and is) an enormous part of that for me. So, I am naturally drawn to topics like this, and it’s very likely that this is one of the reasons I have been so passionate about Wholetones.

I personally feel as though music has helped ease bouts of depression for me during some difficult times in my own life. When I meditate, I tend to want certain types of music playing. When I’m typing (like right now, for example), I play something in the background. You probably already guessed that. LOL! But, not just one thing. Sometimes I feel like Mozart is what I need to hear softly in the background.

Now that physicians, surgeons, dentists, and other medical professionals have come to realize the powerful healing and impact that music has on their patients, most of them would answer ‘yes’ when asked can music heal.

Music also has quite a profound effect on those that suffer from mental illness. Depending on the source, it has been reported that about one in five adults living in the United State suffers from some form of mental illness. Sadly, less than half of these people get appropriate treatment.

It’s probably a pretty obvious statement to say that mental health issues create a vast array of problems and costs over $2 trillion each year in treatment costs. While there are several effective types of alternative treatments such as yoga, art, meditation, and other creative outlets, few have the therapeutic impact that music does. People who don’t have readily available treatment plans, alternative or traditional, have found that music is a viable solution.

Individuals with mental illnesses that listen to music or play musical instruments often find that music is a very powerful form of treatment. Scientific research has determined that musical therapy is so powerful that it has the ability to treat and improve schizophrenic conditions. Musical therapy has also been proven effective at treating depression, chronic pain, and anxiety. The fact that music has a physical effect on humans makes it an optimal treatment plan to also help with certain health conditions. Health issues such as high blood pressure, cortisol levels, and high heart rates have all been successfully treated with music therapy.

Other studies have shown that listening to music that contains positive messages can actually encourage positive thinking, increase empathy, and encourages more positive behaviors in people. People that listen to music that contains powerful positive messages often find it easier to connect with others while also increasing their social awareness and abilities. When participating in a musical therapy program the outcome is typically all positive, and it tends to reduce mental health concerns. Besides helping to treat mental illness, music also has a profound effect on healing other health conditions.

Music therapy is now widely used to help people that have health issues. A fine example is how clinics that provide chemotherapy recommend that their cancer patients listen to music while receiving treatments. Just listening to their favorite songs or a recommended genre has provided chemo patients with less nausea, lowered anxiety, and less pain. Music therapy is also used to relax and encourage patients to heal. Typically, a music therapist will select the type of music that is known to stimulate and encourage healing.

A lot of hospitals, doctor’s office’s, dental offices, and other clinical settings use music to comfort patients. Surgeons have also found that playing music while in the operating room can help them relax, and comfort their patient at the same time. Music therapists have a unique ability to help patients to reach their goals while recovering from strokes and dealing with the harshness of chemotherapy.

Since each person is different, so will the music that speaks to them and encourages them to heal. One person may find that heavy metal provides just the distraction they need, while others may prefer Beethoven or Mozart while dealing with health issues.

I mentioned earlier how sometimes I feel the need to play Mozart in the background. I have no idea why Mozart, any more than I can’t explain why I do NOT want to listen to certain other classical musicians (e.g. Hayden doesn’t relax me, nor does Handel even though I love the Hallelujah Chorus). There is something called the “Mozart Effect” that I want to explore as well. 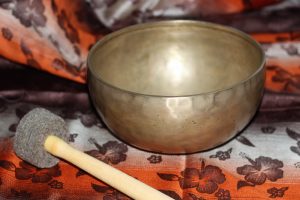 Another thing I love (on occasion) is the sound of Tibetan Singing Bowls. I find it interesting, though, that it’s only SOMETIMES that I look for that sound. Other times I find it distracting.

Research has proven that listening to music while having procedures such as a knee surgery or testing such as a cardiac angiography or a colonoscopy reduced the need for sedatives because it helped lower anxiety levels.

Additionally, music therapy has been used to help restore lost speech in individuals that are recovering from traumatic brain injuries or strokes. I wish my dad would participate in this type of therapy, because he suffered a stroke about 6 years ago, and has struggled mightily to speak again.

What’s interesting to me is that my dad was one of the people I sang with the most growing up, so I would have thought that he would have jumped at the chance to try learning to speak again through singing.

Since the ability to speak comes from the left-brain, and the ability to sing is just the opposite (originating from the right side of the brain), music therapists have been able to teach patients to communicate again by first starting to sing what they are trying to say and then “drop” (for lack of a better word) the melody so that they are speaking instead of singing.

I can remember many years ago, when I had a cousin who suffered from a devastating genetic illness began losing her ability to speak. My mom would encourage her to “sing” what she wanted to say – and that worked for a long time.

When considering all of the amazing things that music does to the entire body, we are a fortunate that there are musicians and therapists that are capable of using it to benefit those in need.

I’ll sign off for now, but want to leave you with one of the classical videos I sometimes play in the background (this is Mozart). I sometimes wonder what Mozart or other musicians from that era might have thought had they ever known that their music would be on something called “YouTube” or used in something called “Music Therapy.” Anyway, this is a 1-hour video – just play it softly in the background when you’re trying to study and see if it helps!

Discovering Solfeggio Frequencies And What They Can Do For You

10 of the Best BCAAs for Women