It seems ironic that cooking and eating should be associated with fat loss. Even more ironic is the fact that something known as Metabolic Cooking should help consumers burn fat while they continue to eat great-tasting food.

How can this be possible? Is it an unlikely but convincing concept led by a charismatic and beautiful pair of fit people? We love cookbooks and beauty in our society and there is always room for one more food book, especially one featuring an attractive couple. Here is the latest and, if it’s true, one of the greatest fat burning cook books. 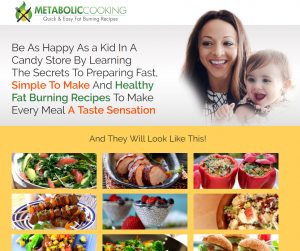 Where Metabolic Cooking Comes From

As far as before-and-after pictures go, the ones of Karine Losier are not very convincing. She had a very nice body prior to meeting Dave Ruel who taught her to cook for fat loss.

Obviously, Karine did not like her body so much; she was happy enough to try a new way of eating.

This French Canadian with a Masters Degree in Psychology got her inspiration from clients who could not lose weight but didn’t know why. They tried many things and were desperate; depressed about the frustrations of trying to shed fat.

Dieting made their experiences worse. Clients merely gained back the weight they lost and found it impossible to stick with any kind of eating regimen.

What they did not know was something that Karine found out and shares on her website: “You aren’t failing your diet; your diet is failing you.”

What happened next was a story in romantic cooking. Losier met David Ruel who taught her a few important truths about cookbooks.

There are three big problems with them:

Losier’s Metabolic Cooking answers all of these issues by providing readers and amateur chefs with uncomplicated and beautiful recipes, but lots of them. Your system won’t become bored or accustomed to the same foods every day.

Rev up fat burning by keeping your metabolism on its toes and by feeding it the food you need. In fact, Karine Losier shows readers some tricks which take the complexity out of gourmet meals so yours can taste at least as good without the effort or fuss chefs learn during their years of training. 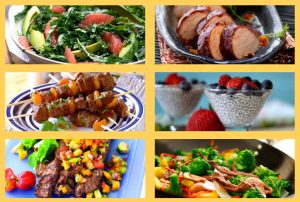 I was impressed while browsing a sample of recipes from the Metabolic Cooking cook book. They were formatted like recipe cards, at least online, and showed me exactly how simple cooking to burn fat really can be.

There were very few steps to each recipe. The only down side I could see was that there might be too many ingredients sometimes.

Losier lists a lot of mouth-watering but simple dishes, including muffins, which I never expected to see in a fat-loss menu. There were dishes containing vegetables, fish, chicken, and other staples.

What really interested me as a food lover, cook, and reviewer is that many of the recipes are high in protein but either lack wheat and dairy or limit those considerably. Many of the recipes I read would be suitable for someone with Celiac disease or sensitivity to gluten and dairy.

The main point, though, is that consumers should be eating more lean protein which is provided in the form of lean chicken and other animal sources, nuts, and protein powder. Losier uses seeds and plants to bulk up protein and overtake the amount of carbohydrates commonly seen in these foods.

People with allergies will find suitable recipes while their non-allergic friends are also able to celebrate the flavors in their new menu book. Karine Losier co-authored her book with former mentor, now husband David Ruel who specializes in fitness nutrition.

Nothing sells a product like convincing testimonials. Some of the images do not depict extreme changes, but others start with obesity and end with a supermodel figure. By the look of these pictures, Metabolic Cooking really does cause one’s metabolic system to heat up and burn fat, but without making a person feel deprived.

What is the sense in starting something you can’t finish? Metabolic Cooking has been featured in various mainstream publications, so it’s no gimmick. This one looks like it really will work.

The Relaxation Response by Herbert Benson