MMA’s popularity has overtaken that of WWF and has also become useful in the wider fitness world. Moves from MMA are incorporated into workout systems and programs at gyms around the country in order to motivate participants but also hasten results.

RUSHFIT by Georges St. Pierre is one such system, developed around the essential elements of MMA technique, now available for home use by men and women of any age or fitness level with access to a DVD and TV.

Who Is Georges St. Pierre (GSP)?

By blending expertise in several many martial arts and other sports, Canada’s Georges St. Pierre (GSP) has become an MMA champion and UFC celebrity. He holds two black belts and trains in multiple disciplines, but he doesn’t do it alone.

GSP credits Erik Owings as a contributor to his RUSHFIT program. Owings, another UFC champion, is featured on the video and helped GSP develop the moves he shares in this home fitness system.

Set yourself a goal, whether that is to lose 20 pounds or be able to play sports with your kids this summer without feeling out of breath all the time. Develop a body that is beach ready, slimmed down for upcoming nuptials, or toned for competition.

RUSHFIT will help you meet your personal goals. Use this system alone or in combination with other athletic fitness programs.

GSP’s RUSHFIT system is a whole-body approach to getting fit that won’t take up hours of your day or months of your life. Set aside 8 consecutive weeks, commit to following GSP’s guidance, and you will meet or even exceed your objectives by the end of that 2-month period. All you need is 25 minutes each day and a little bit of equipment.

How can GSP promise to transform a person’s body with less than half an hour of fitness every day? Aren’t most workout programs at least 45 minutes, possibly 90 minutes long? They are, but this one is different because participants use their time more efficiently.

Instead of getting sweaty and becoming bored with a series of repetitive routines, condense your effort into 5 moves carried out over 5 minutes each and inspired by Martial Arts. You do not have to know karate or Jiu Jitsu to get the work done.

Georges St. Pierre provides 6 DVDs with 7 workouts so consumers don’t become bored after just a week or so. 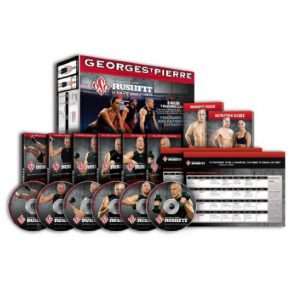 Boredom is one fitness killer; lack of time is the other. GSP removes both of these obstacles and with them the pair of excuses most people rely upon to avoid exercise and deny themselves a chance to make positive change.

You won’t require lots of equipment, another deterrent created by certain fitness regimens. Whatever space you have at home plus a few pairs of free weights ranging from 2 to 25 lbs is perfect. Give yourself some room to grow by starting with low-value weights and supplying assorted values to challenge yourself as you become stronger.

GSP’s RUSHFIT targets strength, endurance, flexibility, core stability, power, and balance. In other words, he has all fitness basics covered in under half an hour daily. That doesn’t mean you won’t work hard, but before you know it the work will be over.

A menu plan and guide books are also provided to help you eat right for maximum results to facilitate weight loss, build muscle, encourage cellular recovery, and fuel yourself for the effort.

Todd Stohrdahl keeps a close eye on fitness topics and will never turn down an opportunity to play competitive sports. He's a fierce competitor and brings his "hustle and muscle" mentality to our editorial team.

How To Increase Collagen Naturally