Genes are found inside the nucleus of cells in the human body inside tightly bound strands of DNA. Telomeres are also essentially some form of DNA and they are found at the end of a chromosome to be exact. The main function of telomeres has been traced to the protection of vital genetic data. This data is believed to include information about genes which indicate how long we will live and how vulnerable we are to certain diseases and infections.

Telomeres enable certain cells to reproduce although they themselves do not replace each other. Once a telomere is frayed or has been stretched out, it is not likely to create another to replace it. 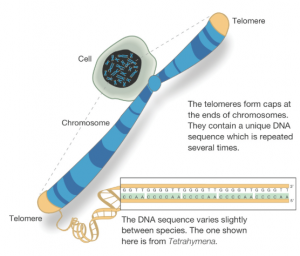 Their biological capabilities and composition is very different from ordinary cells and that shows us that they are the key component in aging and its subsequent effects.

Telomeres get frayed as the body gets older and they begin separating from the DNA strand for which they are the binding factor. When this happens the body loses some of its inherent immunity and also becomes more susceptible to diseases.

Cancer in particular has been linked to Telomeres in the sense that shorter Telomeres make you more vulnerable to it. In addition to this, Telomerase supplements can actually give you cancer which is why at the moment they aren’t being marketed as the ultimate fountain of youth type solution.

Difference Between Telomeres And Cells

Cells have the inborn capacity to reproduce at least 80 times but Telomeres only get shorter till they can no longer hold on to the DNA. This is how aging affects us and our body’s ability to deal with and react effectively to its environment. Telomeres do not reproduce at all and the body finds it difficult to create them again which makes aging an unavoidable scenario.

In the heart telomeres have a good chance of lasting longer since cells do not reproduce there as much as they do in other areas of the body. Some people have genetically shorter telomeres which means that they can become victims of premature aging and other age related issues which everyone may not be afflicted with.

Telomeres hold the chromosomes together so that they can be passed on to the next generation. Without the existence of telomeres the chromosome would get shorter and shorter every time cells divide or reproduce which is why they are important and longer telomeres are actually a useful genetic trait.

If you are looking to take control of your telomere lifespan and make sure you are doing all you can to stop telomere aging, you can use a night cream like this product to help slow the process.