Cryotherapy has been in use as a medical treatment for 150 years, since it was first developed way back in the mid-1800s. Since that time, the way cryotherapy is used has been developed and advanced, and is now most commonly used to remove minor skin conditions like warts and non-cancerous lesions. It can also be used for the treatment of some kinds of skin cancer, and is now being developed further as a way to treat pain and inflammation throughout the whole body.

When used to treat warts and lesions, the liquid nitrogen used in cryotherapy is actually placed directly onto the surface of the skin, for just a few seconds, rapidly freezing the affected skin cells before allowing them to warm up slowly. This kills off the diseased cells that cause the skin condition without causing any permanent damage to the healthy skin around it.

Patients will experience a little pain during the treatment itself, and there is likely to be redness and swelling where the cryotherapy has been applied, but the site heals in just a few days, leaving no scarring or other signs of damage behind. 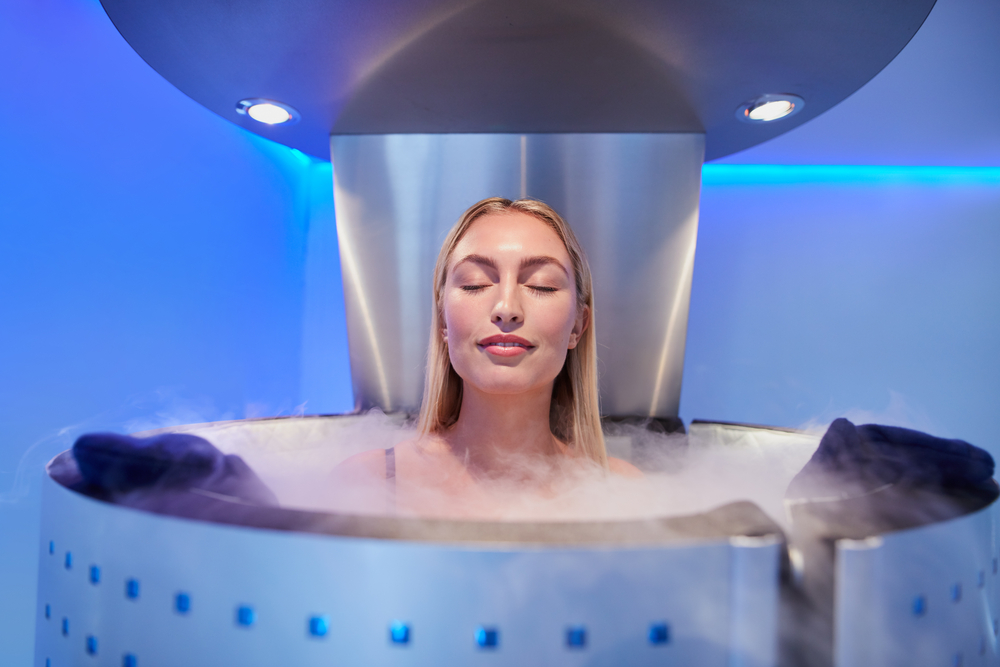 Cryotherapy most commonly uses liquid nitrogen, applied directly to the warts or lesions on the skin through the use of a cotton swab. However, it is becoming increasingly popular for people with sports injuries or other inflammations and medical conditions to use cryotherapy as a whole-body treatment. You’ll often see professional fighters post pictures of themselves doing this.

Instead of applying the liquid nitrogen directly to the skin, patients are instead exposed to nitrogen vapor while seated in a cryotherapy chamber. Cryotherapy chambers seal the body from the neck down, causing the temperature of the skin to fall rapidly, while leaving the body’s core temperature unaffected. The sudden exposure to temperatures below freezing also causes blood vessels throughout the skin to constrict.

After the treatment is over, and the patient has been removed from the cryotherapy chamber, the blood vessels dilate and return to normal, improving blood circulation and the movement of nutrients and oxygen throughout the body.

Is Whole-body Cryotherapy the Right Treatment for Me?

Whole-body cryotherapy treatment is currently most popular among professional athletes, looking to recover as quickly as possible from injuries or the exertions of competitive sport. It has been found to speed up recovery from muscular injuries, as well as acting as a natural pain reliever. The sudden shock of the low temperatures encourages the release of endorphins in the body which act as a natural painkiller.

However, this is not just a treatment for professional sportspeople. Anyone who is suffering with a serious muscular injury can benefit from whole-body cryotherapy treatment. In addition, it can be beneficial for other health problems such as depression, as the release of the endorphins can help to boost the patient’s mood, increasing their energy and vitality and even speeding up their metabolism. This final effect means cryotherapy treatment chambers can also be used as an aid to weight loss for people who are struggling to lose weight.

If you think that whole-body cryotherapy treatment might be helpful in treating your condition, then you should first speak to your doctor to establish if there is any medical reason why you shouldn’t undergo such a treatment; after all, you are exposing your body to extreme temperatures, and there may be health reasons why it is not suitable for you.

Cryotherapy is now available throughout the country, and is becoming increasingly common. Treatment only takes a few minutes and the benefits can be felt immediately — one of the reasons it is so popular with athletes. This is a treatment which has evolved in every generation since its invention, and it is continuing to change for the better, helping more and more people with their medical problems and illnesses.

Activated Charcoal And Its Uses