I just became aware of a cool item called The Neck Hammock, a cervical traction device for use at home (or on the go, since it’s portable). So, naturally I need to start up a Neck Hammock review!

I can’t help it! And maybe it’s just a coincidence. But, it is interesting that just today it came to my attention, because I was wondering about what I could do to help alleviate some issues that have flared up with my neck and upper back this last week.

Years ago – like, back in the late 1960s, early 1970s, I remember my mom using some bizarre looking contraption that hung from the doorway and held her head in some sling-like thing with metal crossbars and pulleys. She swore it made her neck feel better. And all I could think (at the time) was that this was a recipe for trouble – and I remember laughing (of course I did since I was just a kid with no thought about anything but myself).

Throughout the years, I’ve occasionally had bouts of flare-ups in my lower back, upper back (oftentimes the rhomboid muscles), and less frequently, my neck. The burning in my neck and rhomboids can sometimes get quite distracting.

This is one of those weeks. It came on pretty suddenly (as these things tend to do), and on Saturday (6/9/18), I was having difficulty getting in and out of the car, up and down stairs, and turning over in bed.

Because I’ve been steadily working out, and my back muscles are a LOT stronger than they used to be, it’s not been as debilitating as some bouts of pain in the past. Still, I haven’t gone to the gym once this week while I allow this to pass.

Today, Thursday the 14th, my lower back is improving a little, but is still inflamed, and my upper back and neck are quite sore as well.

It’s nothing new as I mentioned. For some reason once in a while this just happens.

BaxMAX helps ease back pain – but what can help my neck?

For my lower back, one of the things that I use often (and in fact have it on now so that I can sit and work) is my BaxMAX lumbar support belt. It helps a lot – it doesn’t “cure” anything, but it gives me support and I’m less likely to strain my back while I’m recovering from a flare-up. (BTW: Buy your BaxMAX at their website, www.baxmax.net, and use the exclusive code they gave me to SAVE YOU 15%: KTSAVE15 – that’s it! You just use “KTSAVE15” at BaxMax.net, and you will instantly get 15% off! 🙂

But, NOTHING has seemed to help my upper back and neck (other than massage, and unfortunately I don’t have a personal massage therapist on call at the moment).

When I was still down in Florida a couple of months ago, Hoang Le (the massage therapist whom you’ve perhaps heard me talk about – especially when he guided my cabbage soup detox this spring) did quite a bit of work on my back and neck.

One thing he did was put me into a type of neck traction thing.

I wish I had a picture of it, but I wan’t able to take any selfies when I was laying there on the table!

Anyway, it felt good (once I got over the strange sensation of having my head “pulled”).

So that brings me to this morning, when I began to think about my mom and her “neck contraption” as I called it then. I was wishing I had something like that since I can’t get back to Florida right now for a session with Hoang’s contraptions!

THAT’S When I Learned About The Neck Hammock! 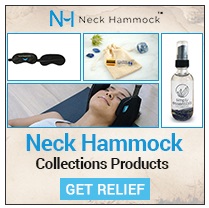 Seriously, it was almost the exact moment when I was thinking about it, that the Neck Hammock cervical traction device was put in front of me. Well, not literally PUT in front of me.

Martin saw it, and immediately sent me an email to have a look at this thing. Wow! As soon as I saw it, I had to look into it!

And he didn’t even know I was struggling this week with neck pain!

That’s why I got so excited and felt the need to start up a series of Neck Hammock review posts, to follow along! I’ll definitely get some video going too.

I’m buying it. Like, right now after I post this initial article. Because it looks like just what I need for some neck relief. After all, I can’t ask John to stay home and hold my neck for 10 or 15 minutes. LOL!

Before you think I just go out and buy the next best piece of sliced bread, I did spend a couple of hours researching it, including looking for some Neck Hammock reviews. There are a few at the official Neck Hammock Amazon page here (I also instantly signed up to promote it because I love the look of this thing so much!).

So, you already know I love CrossFit. When I went to the site, and saw an endorsement by Jackie Perez, who is an amazingly super fit CrossFit athlete, I nearly bought the thing then and there. But, I waited until I did more research. 🙂

By the way, I’m buying it with my own funds, without any special consideration from the company. So, it’s not like anyone is tempting me to do any special type of review. This is the type of thing that is way too important to me!

To be fair, there are some negative reviews at Amazon (here) – as of this writing, about 11% 1-star – but about 66% 5-star, and 12% 4-star. I looked at the 1-stars (as most of you would likely also do), and it seems like one person felt it had some design flaws, and another couple of folks said it didn’t help their neck pain.

I read through the 3-star reviews (there were 3 of them). One person thought it was difficult to set up, and didn’t seem to offer any real comfort. Another said the instructions were hard to follow, but she had only used it once. The third said she has tried it for 5 days, and doesn’t seem to have relief. She is waiting another week (no updated review as of this writing).

NOTE: The vast majority of Neck Hammock reviews (verified purchases), both 4- and 5-star, include more in-depth feedback, which is what I’m looking for.

What probably sold me most of all was a 4-star review from an avid Crossfitter! She mentioned something that I think is worth repeating: Beware of knock-offs!

In fact, there was one chiropractor who had given a review that would APPEAR to be for the Neck Hammock, but he retracted some of what he said because it turned out he purchased a cheap knock-off. He did admit to that, and promised to give a more true review later. Hopefully he does that.

There were some excellent, and well-thought-out 5-star reviews that were very helpful.

Again, to see the VERIFIED reviews at Amazon, you can simply click here.

It’s time to talk about the Neck Hammock price…  The device itself appears to be about $49.

I am unsure whether or not there are any codes that would work with the Amazon listing. Sometimes when I shop at Amazon, I see little “coupons” in the listing itself – so whether or not the folks at Neck Hammock do this on occasion is something I don’t know. In my experience, merchant coupons don’t always work when purchasing off Amazon.

As an aside, I made an initial video a while back for one of my YouTube channels, and if you watch it you can see the entire ordering process, including where to put the Neck Hammock coupon code if there are any available for their actual site.

One Step Forward – Two Steps Back (and Thoughts on Keto)