After a grueling 12 round fight, Jeff Horn won a unanimous decision against Manny Pacquiao in front of 55,000 people in Brisbane, Australia, becoming the new WBO welterweight champion of the world.

There were a few surprises throughout this fight, and it was a controversial decision. The commentators were surprised to see Horn’s conditioning, since he came out swinging in the first round, and was able to maintain a pretty good pace for all 12 rounds against Manny Pacquiao. the pace of the fight was also surprisingly high for all twelve rounds. Horn landed a much lower percentage than Pacquiao, but he was relentless in his attempts to try to end the fight by KO.

There were two head clashes and Manny got a cut on both sides of his head, and then the fight was almost stopped after the ninth round, as Pacquiao turned up the heat and got Jeff Horn pretty good, and then he came back with all heart, and was relentless, Rocky style, and came back with the win.

The commentators didn’t agree with the decision, and felt that it was influenced by the fact that Horn was fighting in his backyard, and with the 9th round, which they all said Manny won a 10-8 round, despite the fact that two judges were from the US.

The fight stats also brought the decision into question: 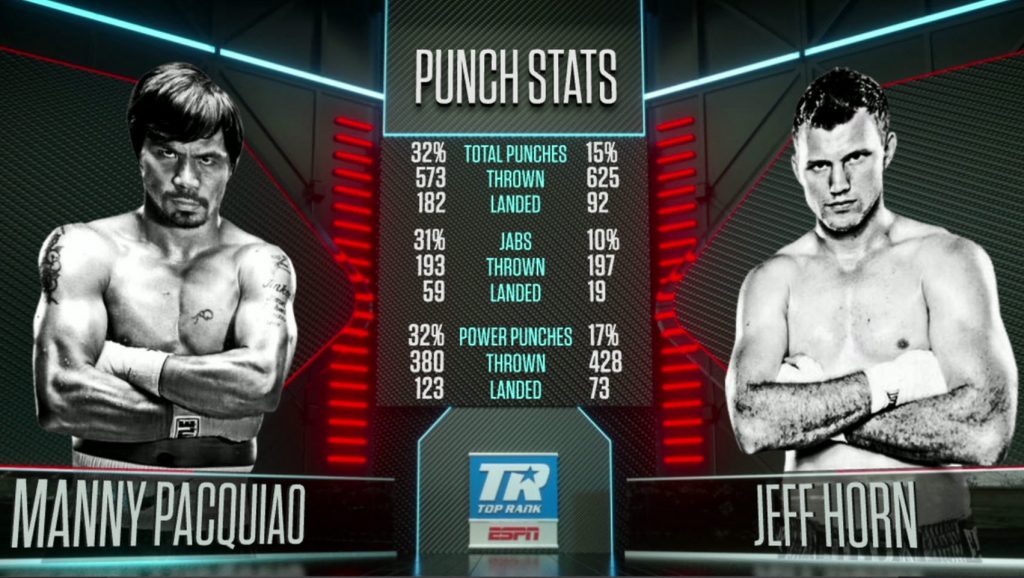 That being said, Jeff Horn showed that relentles, never give up Rocky style, which had to have swayed the judges. They actually referred to him as a real life Rocky Story.

When Manny was asked whether he thought he won, he was gracious in defeat, and said that he respects the judge’s decision.

After the fight, they immediately spoke about a rematch, and then the commentators were rehashing how they disagreed with the decision, and reiterated with Manny asking that he is up for a rematch, which he said absolutely yes.

After the fight, the commentators still were going on about the decision, looking into the judge’s names etc., so there was a residue of controversy that permeated the atmosphere.