From the latest posts on Instagram from Vasyl Lomachenko, it seems he may be hinting at a rematch with Orlando Salido in August, 2017.

Lomachenko lost to Salido in his second pro fight, which was for the vacant WBO featherweight title.

You may wonder how Vasyl got a title shot in his second pro fight, and that has to do with his amateur record, which was 396-1, along with gold medals in the 2008 and 2012 Olympics.

Anyways, he first left a comment that he is looking to fight in August, but it isn’t confirmed.

Then he posted a picture from the fight with Salido, and one of the hashtags was #redemption, and so it seems he may be hinting at a rematch. 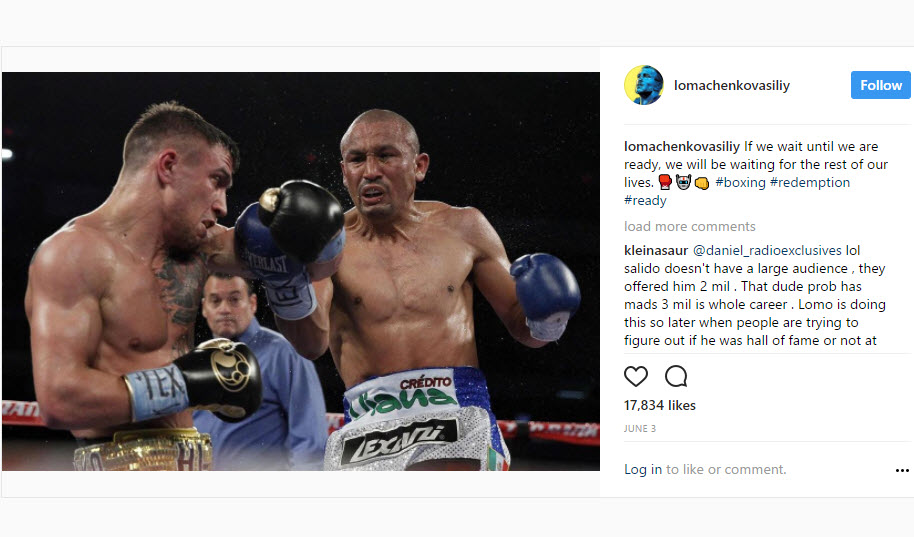 Back in April, there was a video posted with Bob Arum that he will be having a rematch with Salido in the summer of 2017, but Vasyl recently said the August fight is not yet confirmed in his post:

He didn’t look himself against Salido, if you compare how he fought, even the very next fight. The commentators said during the Salido fight that it may have been his lack of knowledge how body shots are treated in professional fights, compared to amateur fights, that as a pro, you do get points for body shots, and not as an amateur. Also that Salido got away with a lot of low blows and the ref didn’t notice.

Whomever he fights, I am looking forwards to it, and after having seen the fights after his loss to Salido, I can’t blame him if he wants a rematch. He was gracious in defeat, and had no excuses for the loss, although I can’t help but wonder if he wasn’t feeling 100% or something because of the dominance he has had over the following boxers he has faced. His next 2 fights went the distance; the full 12 rounds, and then he finished the next 5 opponents.