Supermarkets and whole food stores are going crazy over wheatgrass. If you have talked to a holistic caregiver or an enthusiastic health nut in the last few months, he or she has probably mentioned this natural food which contains concentrated amounts of almost every nutrient found in a multi-vitamin.

Restaurants offer wheatgrass in their smoothies and grocery stores sell plants you can grow from home. What is this product and is it truly as amazing as consumers are led to believe? Could this just be another super-food craze? 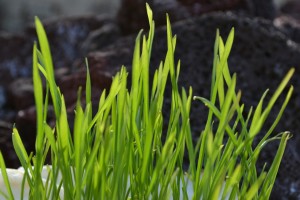 What is in Wheatgrass?

Companies that sell and promote wheatgrass insist this plant (which is, indeed, a type of grass) contains high doses of minerals, vitamins, and protein. If you consumed just a couple of ounces daily, that would be better than taking a multi-vitamin, provided the grass was fresh.

Those vitamins and minerals include C, A, several B Vitamins, magnesium, calcium, sodium, and more. It is easy to absorb and provides vegans with an excellent source of protein. Give it to children in their smoothies or mix it in with soup. No one would know the difference.

Is This a Medicinal Plant?

In the world of alternative medicine this is also treated as a medicine. Wheatgrass is said to oxygenate the blood which is critical if our cells are to heal themselves properly. It is an antioxidant, detoxifying the body of free radicals and environmental poisons; thus, it is treated as a cancer-fighting agent. Some advocates even claim it can be used to regulate diabetes and inflammation, lower cholesterol, and aid in the treatment of lung diseases. It’s even used to prevent the signs of aging.

Is There Any Proof?

Scientists can tell you that the nutritional components listed above are truly present in wheatgrass. They cannot, however, verify claims that wheatgrass is useful as a medicine. One should never forgo medical treatment for cancer or asthma in favor of nutritional supplementation. Studies are underway; meanwhile, consumers are conducting their own “studies.”

How to Eat Wheatgrass

This is not a salad green; consumers tend to prefer wheatgrass in smoothies and since it takes very little plant matter to provide all of those essential nutrients mentioned earlier, you might not even taste the plant if it is pureed with a lot of berries, milk, yogurt, juice, and/or banana. There are two caveats, however, which consumers should be aware of.

Producers market this as “gluten-free” nutrition. Celiacs wonder if this is too good to be true. They would like more studies to be done in order to confirm claims that only the seed contains gluten. Secondly, wheatgrass is best served fresh. That calls into doubt the efficacy of powdered products or juice and also puts the onus on consumers to do their own research.

Is the smoothie parlor you frequent using absolutely fresh wheatgrass or has it been sitting in a refrigerator for several days? Making your own smoothies with fresh grass grown on your own windowsill might be a more nutritious and cheaper way to go.

Stores and e-commerce sites are full of the stuff: you don’t have to look far. Wheatgrass is neither rare nor exotic. It is sold in several forms: as a fluid in tiny capsules, as a powder, as a plant or seed, and as a pill. Which one will provide the densest nutrition? That is not easy to say. One rule is to buy a supplement in the form you are most likely to take. Rotting or withering plants are no fun, so if you don’t have a green thumb, avoid plants and seeds.

Liquids which have been flash frozen could be the most convenient while maintaining nutritional integrity. Stick a sheet of juice pods in the freezer and take out just one dose at a time. You won’t waste any of the juice or measure anything, but that method is expensive.

You might find that a powder is simply easier and doesn’t look gross (wheatgrass juice is dark green and suspicious-looking). All you have to do with powder is scoop it and there is no mess. It can go anywhere without need of refrigeration, although there’s that question about freshness again. Growing your own is the cheapest method until a new super-food supplants wheatgrass.

Make Your Own Alkaline Water

Traditional Wisdom And The Health Benefits Of A Sauna