What Are Vape Pens?

Vape pens are pen-shaped vaping devices, which are typically of the eGo model size, yet pens can emcompass smaller devices, or cigalikes, and larger portable devices that are merely tube shaped, and so they resemble a fat pen.

Put these two ideas together in your mind, vaping and pens. That doesn’t seem natural, does it? A vaping device creates vapor and is an electronic unit. A pen contains ink and doesn’t usually do anything exciting.

You puff on one and write with the other, so how can the two be related? It’s all in the shape. A vape pen resembles a writing implement, which is a deliberate design strategy on the part of manufacturers.

A lot of people like to pretend their vaporizer is something else because they know people around them would scowl or make judgmental comments if they knew what it was. Sure, it’s none of their business, but confrontation is avoidable by being discrete about your hardware.

Don’t risk that a person will presume you are puffing on marijuana (your boss, for example) when you are really just looking for a smoking alternative. Disguise your vaporizer as a common writing implement and no one will even notice it sticking out of your pocket.

Even when it’s in your mouth many individuals would assume you were simply chewing on your pen. Only the presence of vapor and little lights on the device would give away its purpose, but you don’t use it just anywhere. Pull out a vape pen when you take a coffee break with other vapers, smokers, and those who don’t care one way or the other. 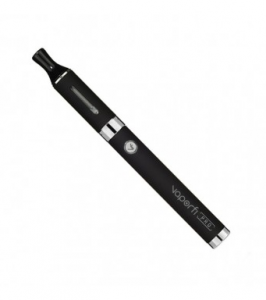 How Do Vape Pens Work?

At the base of a vape pen is a battery. This heats a coil element which causes herbs or liquid to become very hot but not burnt. As materials heat up they emit vapor which flows through a mouthpiece where the consumer inhales it.

It’s very simple. The system is often presented as a one-piece unit, the chamber embedded in the device and a non-removable battery built in. Sometimes they are two-piece items, battery and cartridge, allowing an individual to replace one part if it wears out but hold onto the other instead of having to purchase a whole new vape pen.

Internal programming determines how hot the element can become. If a device is made specifically for herbs, the highest level is usually just over 400F. Liquids and wax require higher temperatures which would burn herbs. A unit devised to vaporize multiple materials is either designed to be regulated by the user or automatically recognizes the cartridge for what it contains.

An example of the latter situation is the V2 Pro Series 3 pen which features a magnetic connection between the battery and cartridges for herbs, liquid, or wax. A code in each one tells the base how high to set the temperature. With the two parts in place this really resembles a white-board pen. A Pro Series 7 is user-regulated and a little bigger.

The Orbit by Vaporfi is for use with dry herbs only. Like the Pro Series 3, it heats up quickly, but only to herb-ready temperatures. It is automatically regulated. Both starter kits cost less than $100.

The KandyPens aromatherapy model looks like an elliptical-shaped felt pen coated in one of several possible shades and containing a copper titanium element for excellent durability and optimum conductivity. It only works with aromatherapy materials and, like the others, is operated by pressing a single button.

What’s the difference between these two classifications? A lot of the time, customers can tell by the price just what they’re looking at. Size is also a deciding factor. Some companies say their vaping pen works like a portable device which means the coil is long lasting, vapor production is excellent, and herbs aren’t burned but vaporized.

This last point is probably the most significant one. Small vaporizer pens don’t contain the room to house a sophisticated heating mechanism. Herbs are heated directly by a coil and burning herbs is a common problem. There’s little one can do to avoid combustion, even with a filter placed between the element and herbs. This measure doesn’t usually do the trick, but replacing conduction heating with a convection system works. That’s what one finds in many portable vaporizers.

Can portable vapes also be pen-style vapes? They tend to become too large as technology is added and the system improves. Then again, innovators are making everything smaller, like the PAX 2 which measures less than 4″ in length but is more powerful than its longer predecessor. A Firefly or Davinci Ascent, however, would be hard to pass off as a pen. One might mistake either item for a cell phone, however, so at least they retain a “stealth” feature in this regard.

Many portable vaporizers, like the Mighty by Storz & Bickel, are not only large and expensive but they are user-regulated. The Mighty features a large screen and adjustment buttons plus it vibrates when vapor has reached your chosen setting. The Crafty, a smaller version, is operated via your Smartphone. Consumers set up their selected temperature remotely.

Pens and portable units have this in common: they can be carried around and used wirelessly. Desktop mods are connected to mains power. These include the Arizer Extreme Q, Seventh Floor Silver Surfer, and the Volcano by Storz & Bickel. You can’t carry them around.

Reviews talk about long-term value and performance. With a vape pen, you might get six months of vaping before the battery runs out or a flimsy item just falls apart. Did you pay $20 for a vape pen? Expect it to last 3 months. Did you pay $60? You might get half a year out of it.

It’s possible to make some systems run longer simply by replacing the coil every so often. These wear out in anything from a few days to a few weeks, although titanium is longer lasting.

A vape pen is discrete and cheap but savings don’t mean much if you have to buy two of them in a year when a pricier portable vape will keep working for a year or more, produces more satisfying vapor, and creates a better flavor from your materials too.