Westerners frequently conflate meditation with prayer, as though they are naturally the same thing. In some cases, meditation can be a form of prayer, but that suggests one is trying to connect to a higher power. Often, meditation is used to get in touch with one’s deeper consciousness, in which case no god is involved: just an internal monologue or re-setting one’s mind to a peaceful state; that is, unless a religion encourages belief in self-divinity.

Some people see meditation as the equivalent of de-fragmenting a computer: collecting fragments of consciousness and re-ordering the mind in order to start fresh. Others see meditation as a way to connect with God as they understand him. 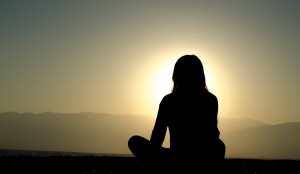 To meditate is to think deeply. Meditation is a state of deep thought, yet not purposeful thinking as though studying for an exam or trying to solve a puzzle. During meditation, one’s internal eye is drawn to thoughts and feelings related to the internal life and encouraged to find meaning as well as serenity.

Many people regard meditation as a healing art and it has been incorporated into the format of many support groups for depression, anxiety, more serious mental illness, addiction recovery, and eating disorder recovery. Groups often explore meditation as a way to deal with grief or chronic pain.

Even those who do not believe in God will frequently turn to this method since it can be made flexible to accommodate all kinds of beliefs. Conservative religious thinkers, however, associate meditation with pagan beliefs and activities. They find it too flexible and potentially inspiring self-devotion rather than merely peace or recovery. To these people, the problem is that the god in question could be any god or they leave deity out of the picture.

Centuries and even millennia of religious practice around the world have involved meditation. Hindus, Jews, Christians, Buddhists, Muslims, and other people of faith have incorporated this practice into their daily lives as regular spiritual routines. Unlike prayer, meditation is not usually supplication. Individuals are not asking or praying for anything but emptying their minds to accept revelation or connection with their divine creator however they envision him.

How Do People Practice Meditation?

Methods of practice vary according to the religion or activity with which they are associated. In yoga, meditation is often about finding power within, so it is performed during a yoga session in groups or alone. Soothing and repetitive music helps to keep classes of stretching bodies feeling emotionally restful and focused so they can achieve and hold postures while also thinking about the state of their minds. Self-awareness and relaxation are common goals during yoga.

Some religions encourage meditation in groups, perhaps in the open as an example to the non-spiritual, but possibly in protected, peaceful places where it’s easier to get focused. It is typical to see people meditate in nature. Music or chanting might be involved to create a universal sound, incorporating a background rhythm that blocks out all other noise and thought which could break concentration.

One might play recordings or a leader could recite these sounds and songs. A group of people chanting in unison will choose a single statement such as “peace” or “serenity” or just a sound which reverberates in the chest and creates a feeling of warmth.

Hermits and monks often find special places where they meditate in peace. They might be meditating on creation, on the nature of God, or on a particular problem or idea. During this time, they seek complete isolation from outside distractions including food and sleep.

It is not unusual to see them sit for hours in the same position. This ascetic practice (in which individuals exercise extreme self-denial) is thought to create internal and external self-discipline. It is believed that, if their efforts are pleasing to God, they will receive knowledge and inspiration, or perhaps even hear His voice.

Participants might not be seeking anything directly from a higher power, but it is typical for them to have an ulterior goal in mind besides gaining a closer relationship with God. If they are not trying to increase their spiritual superiority over others, these individuals are possibly aiming to restore balance in their own being through focused thought.

As they focus and rein in their temptation to move and be distracted, participants hope to gain inner peace and fortification from an inner or external energy. That is why meditation is frequently utilized by individuals in a state of crisis or in answer to a medical or psychological problem.

One often sees people learning how to meditate in response to personal problem: a mental breakdown, being diagnosed with illness or a mental health disorder, or a temporarily stressful situation. Meditation is commonly used to combat stress and its negative effects on mind and body. Parents learn how to teach their kids to meditate if they are hyper-active. One can see meditation, then, as a reactive practice.

It can become proactive, however, if participants decide they gain something positive from meditation and choose to pursue it as a regular activity. In this way, they expect to promote peace and mental health before problems arise. Their goal is to reduce or avoid stress, regularly re-center their minds, and learn to be still.

Some cultures and groups encourage the use of hallucinogenic substances to enhance focus, open the mind, reduce connections to external distractions, and break down the barrier between conscious and subconscious. Although these groups have a long history of such behaviors, this can be highly dangerous and might lead to psychotic events or troubling memories.

There are also pagan groups and cults which aim for a connection between the unconscious mind and evil forces; energy which they hope will give them mystical powers. Their purpose is negative and, even if one regards this as delusional and superstitious nonsense, can affect the mental health of susceptible people, especially teenagers who are looking for meaning and eager to be accepted.